Westward Ho! on the north coast of Devon is a place I have written about quite a lot. Not surprising really as I visit often on family holidays and I’m lucky enough to be able to stay here at a relative’s flat which makes for a useful base when working in Devon and Cornwall.

The area has a lot to offer a photographer and even when on holiday I find myself watching the weather for photographic opportunities. It’s just too tempting to grab my camera and pop out for a ‘couple of photographs’ when the conditions are right. The nature of the coast is such that even after almost 10 years of visiting, there is always something new to discover.

There are two known wrecks on the beach at Westward Ho! but due to the constantly shifting sands they are not often visible. In fact, until the winter storms of 2014 which briefly exposed much of the beach’s hidden secrets including an ancient forest and evidence of an early human settlement, I don’t think I had ever seen the smaller of the two. Since then both wrecks seem to have been a regular feature of low tide.On this particular day only the larger of the two wrecks was exposed. This wreck is widely thought to be either the ‘Salisbury’ of London, lost in March 1759, or the ‘Sally’ of Bristol, lost in November 1769. No other ship of this size is known to have been lost during this period.

The weather had been unusually hot, even for June, with a clear blue sky. Not the ideal weather for landscape photography but as the evening approached and the temperature started to drop, cloud started to drift in over the sea. I decided to take a walk along the beach to cool off and naturally I picked up my camera gear.

The tide was on it’s way out but still had some way to go as I watched the sun set. I had seen the wreck exposed at the previous low tide so I was sure it would appear again. I made a few pictures of the clouds reflected in the wet sand before walking towards where the wreck should be. I soon spotted the timbers protruding though the sea so while I waited for the sea to retreat I planned my compositions to make the most of the colour and clouds in the dusk sky.I wanted to photograph the sky reflected in the tidal pool created by the wreck but I had to wait for the tide to reach it’s lowest point so the waves no longer disturbed the surface of the pool. This gave me a few minutes to enjoy the cool air and quiet solitude before recommencing work. In no time at all the colour in the dusk sky was fading and the tide was on it's way back in but I had my picture. 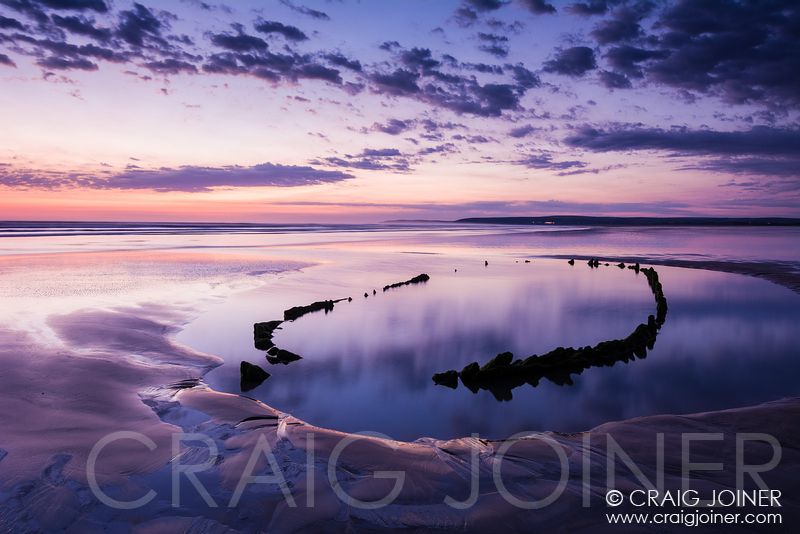